As mentioned in a previous post, I like using the NT4 for location work. I usually use the Tascam DR-680, which has cracking preamps, but often for convenience I use the Zoom H2N, which ain’t half bad. I keep the NT4 in a blimp, but….the H2n doesn’t have P48, which means I have to take the mic out of the blimp to put a 9v battery in. D’oh!

Of course, the mic now needs to be switched on. Once in the blimp, I need to unscrew the front cap, reach in, flick the switch etc. It’s even worse when I have the furry windbreak on – this needs to come off, blimp open, switch, close blimp, furry back on…..oh shit, the recording opportunity has just flown away. Double d’oh!

So, kids….here’s a Hack You Can Try At Home!!!! I bought a 9v battery box, a male/female pair of 2.5mm power connectors, a bit of wire and a bit of heatshrink, all for the princely sum of about 7 quid in Maplins, probably much cheaper on Fleabay. I simple soldered wires to the battery terminals in the mic (mind your polarity, and I guess this’ll void your warranty), ran the wire through the cable duct in the mic mount, female terminal on the wire, male terminal on the battery box, plug in, switch on: hey presto, external battery power with a battery that can be switched and changed over without having to take the mic out of the blimp….

I love little mods like this……half an hour work and your life suddenly is a whole lot easier!

I’m a big fan of the diminutive Zoom H2n field recorder, but sometimes the built-in mics don’t cut it. When I plugged it my Rode NT4 (my go-to stereo mic, as it will run on a battery) I found that the output was surprisingly low….turns out that there is a built-in pad in the DXLR to minijack cable, a leftover from when the main portas were minidiscs, which had somewhat hysterical preamps. After a bit of digging around, I found this tip:

Out came the soldering iron, and now I have full dynamics. Of course if I want decent pre-amps I’ll use my Tascam DR-680, but sometimes you just need to grab something quickly without lugging a kit bag…..

A very rough screen capture of the Pi getting data from the Phidgets board for the first time….

Well, things have progressed somewhat…from a keyboard to a MaKey MaKey was a relatively small step…. 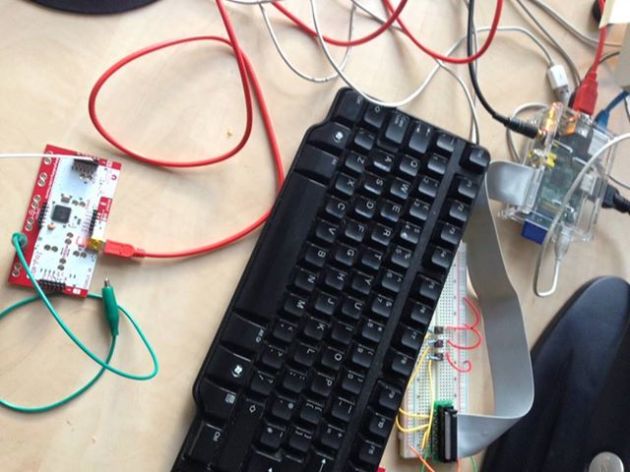 After that, I decided that attaching a tiny TFT monitor would be a funky idea…..this opened up a remarkable can of worms, in that the python library I use to read keypresses (PYgame) doesn’t like to run in non-standard resolutions. Anyway…..after a fair bit of digging I got things to work.

Now then……a challenge. I love my Phidgets (http://www.phidgets.com/), and using the 8/8/8 interface board as an interface to read analogue sensors into the RasPi has great potential. I hadn’t realised that it involved building all sorts of stuff like Python classes, and I even ended up having to dist off some of my old “C” programming skills….but we got there in the end, and the point where my terminal window told me it could see the interface was a fine moment indeed:

and it got even better when I got the Python script to read the sensor inputs working….here is the output from a simple fader:

Right! Time for a new project. This time, children, I have decided to finally do something with my raspberry pi, and I’m delighted to announce that I’ve just cobbled together my first proper bit of Python that allows me to play different sounds by pressing keys on the keyboard. Here ’tis:

This borrow heavily from this excellent Adafruit tutorial:

Disparate spaces is now offline, but you can still download a 24hr capture here.

A student’s idea prompted me to try this…..I grabbed a cheap little ultrasonic sensor (HC-SR04) and interfaced it with an Arduino, then wrote some code in Max to pull out the serial data and turn it into something musical…..